IS YOUR CLASS CLOWN GIFTED? – NEGATIVE TRAITS OF GIFTED KIDS

What is a gifted kid? Has anyone told you one of your students is gifted and you thought, “No Way!”?  We all have preconceived ideas about the concept of giftedness. For example, many people believe they all make straight A’s, are well behaved and motivated.  While many gifted kids display these behaviors, your class clown just might be a gifted kid in disguise.

Gifted kids have both positive and negative traits and behaviors. Not surprisingly, the negative traits and behaviors can mask giftedness. I often see kids initially referred for special education because of failing grades or behavior issues. Everyone is shocked when they learn the child is gifted. How can that be?  Let’s look at some traits and their behaviors and examine how they impact the perception and identification of giftedness. In this post I am only going to focus on four characteristics:  humor, interests, imagination and creativity, and insight. 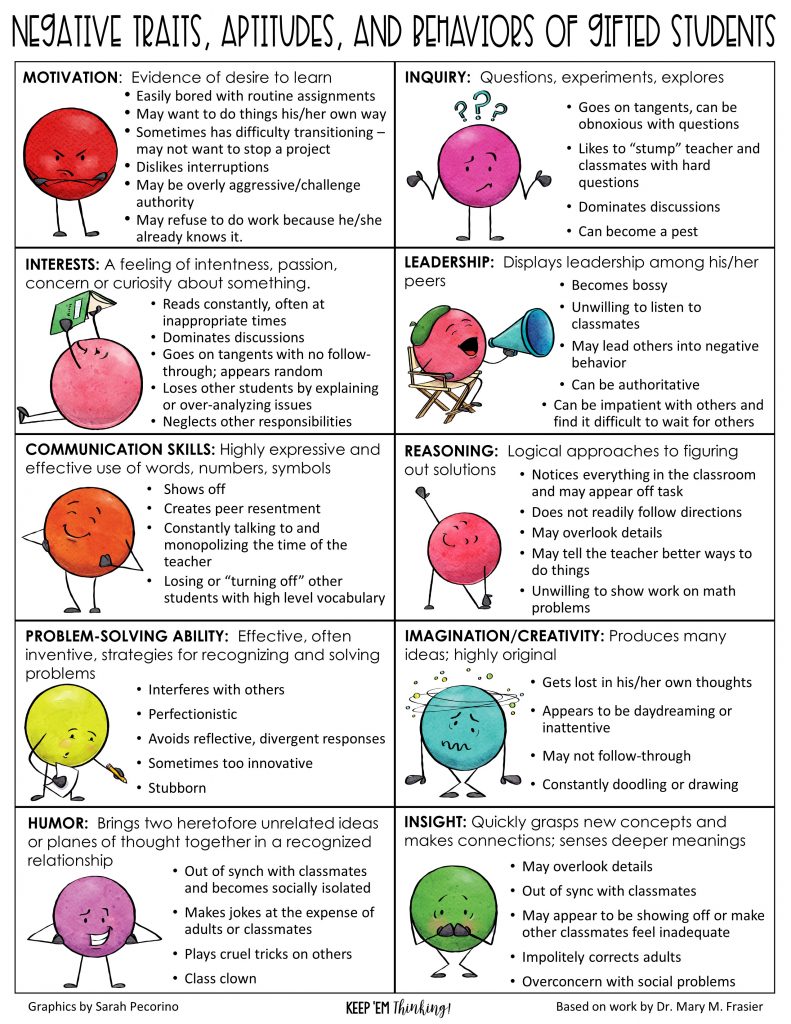 Who doesn’t love a kid with a sense of humor?  Many gifted students have an advanced sense of humor. They can be performers and keep their classmates enthralled telling humorous stories with exceptional timing in their use of words and gestures.

Gifted kids have a well developed sense of humor.  I enjoy reading Amelia Bedelia stories to kindergarten students because I can quickly spot the students who realize Amelia is a literal thinker. They laugh at her interpretation of instructions to “draw the drapes” and “dress the chicken.”

Books with figurative language and play on words are useful in identifying advanced sense of humor. Some fun books you can use are:

Gifted kids often see the humorous side of situations where others might not.  These are what I like to call my Fortunately/Unfortunately kids.  i.e. When a parent recovers her stolen purse a child might say “Fortunately they didn’t steal the car. Unfortunately, they took you money and credit cards.”  Or, in response to a parent’s inquiry about how the child did on a test, he responds, “Fortunately, I didn’t fail the test.  Unfortunately, I made a 65.”

These students often receive considerable attention from peers in the classroom. Consequently, they act up in class, making every answer to a question a joke. Bored, they attract attention by making funny gestures, noises, etc.  They are the class clowns.

Additionally, some gifted students are out of sync with their classmates because they often see humor where others do not. This leads to social isolation. In retaliation, the child makes jokes at the expense of his classmates or teacher. He may even play cruel tricks on them. It is no surprise the teacher is frustrated and does not recognize the child as gifted.

Gifted students can display intense passion, concern or curiosity about a topic or issue and amass a vast storehouse of knowledge about that topic. They also enjoy collecting obscure or unusual facts about their interests. I have seen gifted students in the primary grades who knew more about dinosaurs or insects than their teacher.

On the downside, a gifted student can dominate discussions, become impatient with others with less knowledge, and appear to be the class “know it all.” This results in isolation from classmates. Also, the student may want to explore his passion to the exclusion and neglect of everything else. Take for example Michael, a fourth grader, with poor grades and no interest in school work.

Michael lives on a farm outside the city limits where the night sky is clear and free from city lights.  At a young age, his father bought him a telescope and Michael’s passion for astronomy was born.  Astonishingly, in third grade, Michael could name hundreds of constellations in the sky. He could also tell me how each one got its name. Michael had a wealth of knowledge, but he was failing in school. I was surprised to learn Michael’s teacher had no idea about his passion for astronomy.

Upon questioning Michael and his parents, I discovered he had entered kindergarten with a thirst for knowledge. It was only when the other kids thought he was weird because of his obsession with astronomy that he begun to withdraw. An advanced reader, Michael had no interest in reading anything not related to astronomy.  With the exception of myths, he thought fiction books were boring. Michael is a prime example of a gifted child who is adept at hiding his giftedness.

Concern with social and political issues and injustices is also common among gifted students. They will debate the issues for hours, even becoming aggressive if others disagree with their arguments. Additionally, some students feel things more deeply than others. These intense feelings may cause extreme distress when learning about topics such as homelessness, discrimination, prejudice, and violence. The resulting depression may become debilitating. A student may neglect school work, withdraw from peers, and/or become extremely introverted thereby masking his giftedness. Eventually, counseling and/or medication is necessary to help the student deal with depression.

Creatively gifted students possess a vivid imagination and produce many ideas. They can be highly original and curious have seemingly wild, and silly ideas. They may have imaginary friends, vivid dreams, and a love of music and drama. Highly curious, they show exceptional ingenuity in using everyday materials and excel in STEM and MakerSpace activities in the classroom.

Creative thinkers have so many ideas, they may get lost in their thoughts and have difficulty completing a project. They are often dreamers and may not pay attention in class. Eventually, when they “come back to reality,” they may have no idea what is going on in class. Because of their ability to generate so many ideas, they may have difficulty making up their minds.  Creative Problem Solving activities where they must create criteria for acceptable solutions often help creative thinkers weed out ineffective ideas.

Because of their vivid imagination, creative thinkers often create wonderful stories filled with vivid details.  However, they may have difficult writing for extended periods, and oral dictation may be a better alternative to writing particularly for primary students.

Many creative thinkers are constantly drawing or doodling. Teachers can use this trait to their advantage by having students take doodle notes on concepts being taught. Creative thinkers walk to the beat of a different drummer and don’t fit into any mold. They often have difficulty with organizational tasks which result in lost or forgotten assignments.

A gifted student grasps new concepts with less repetition than most students. A typical student encounters up to twenty-four exposures before mastering a new concept, but gifted students may require only two or three exposures. The high ability to draw inferences, see unusual relationships, and integrate ideas and disciplines, helps gifted students learn more quickly.

The ability to see unusual relationships helps gifted students excel at Forced Analogies.  A Forced Analogy is a comparison of two seemingly unrelated things.  For example, consider the question: How are a shark and a town mayor related?  Ans: They both have thick skins. Gifted students also sense deeper meanings which is why Theme is an easy concept for them to grasp.

Quick learners, gifted students may show off to classmates.  The result can be isolation from peers.  Additionally, teachers inadvertently call on the brightest kids more often, contributing to the rejection. Isolation can often cause a child to try to “hide” his giftedness in a quest to fit in with the rest of the class.  Consequently, grades plummet and teachers wonder how the child is gifted. As early as third and fourth grade, many girls begin to hide their abilities because “it’s not popular to be smart.”

Oftentimes, a gifted student will begin the school year knowing 80% or more of the curriculum.  Gifted students need differentiation. A student forced to complete assignments having already mastered the content, can become rebellious. He might exhibit behaviors such as refusal to do the work, rushing through assignments, or making careless errors. Sometimes, the work reflects little effort or thinking. Eventually, underachievement sets in, and the student fails a grade. If this behavior continues year after year, the student will no longer remotely appear gifted. Lack of challenging and appropriate work is the greatest contributing factor to the estimated 24% of high school dropouts who have been identified as gifted.

Below are some charts which are helpful in identifying gifted students.  Dr. Mary M. Frazier from the University of Georgia, developed the descriptions of these traits, aptitudes and behaviors. One side contains positive aptitudes behaviors for 10 traits of gifted students, while the other side describes negative behaviors and aptitudes for those same traits.  Print these charts back to back on card stock and laminate them. 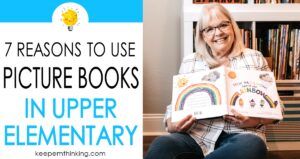 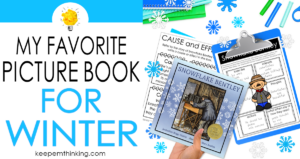 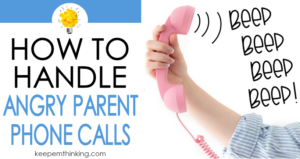 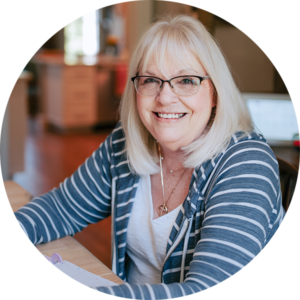 Join thousands of other subscribers to gain access to dozens of free resources. 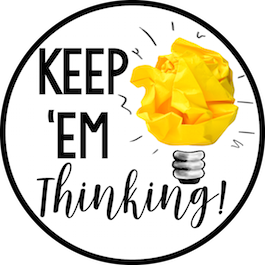